Brandon Blue, President, and Founder of Student Ablaze Campus Ministry grew in his walk with the Lord through Students Standing Strong (S3) a student-led Bible club. He was in eighth grade at Harris County Carver Middle School in Georgia, when he first walked into an S3 club! Brandon was very shy with his faith and was more comfortable keeping it to himself, especially in school. But, God really began to open him up during his time in S3, and God gave him the push he needed to step up as a leader. Brandon took a leap of faith into leadership, with God on his side and the help and encouragement from Ms. Victoria, his S3 Adult Coordinator. 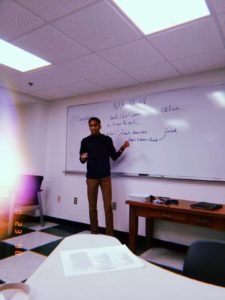 Brandon said, “The more I began to become a part of this S3 leadership team, the more open I became about spreading the Gospel and talking to people about Jesus.” Once Brandon began high school, he was asked to be a leader of Students Standing Strong at Harris County High School.

He was accepted as a leader but still felt shy. Brandon said, “I can’t allow what happened in middle school to replay now, so I’ve got to change my perspective.” Brandon said he knew God had given Him a platform, and he was going to trust God to guide the way and calm his nerves. Brandon said, “Students Standing Strong really helped me become strong in my faith and also gave me the ability to speak about Christ and not be ashamed or afraid, no matter what people think or say.”

Brandon Blue is now at Georgia Southwestern State University, boldly sharing the Gospel on campus and to those he meets.

Click here to bring Students Standing Strong to a school near you!